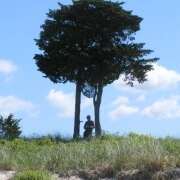 A multicache, or offset cache, consists of a series of single stage caches linked together, and generally similar in style:  The cache page provides the initial stage coordinates and when you reach them you find a second set which directs you to the cache or a third set, and so on.  This allows you to send cachers down a specific route which is useful in a maze of trails, past a scenic vista or feature or simply to provide more stages to look for over a longer hike.

Rather than have each stage be identical except for the coordinate numbers, it is easy to provide a variety of stage directions, which require a larger navigational skill set than "follow the arrow".  Here are some different types of multistage directions I have used.  I would be interested in learning others you have done.

2.  Landscape Features:  "Look to the north and spot the single large pine tree:  go 1000 feet towards it until you reach the large gray boulder"

3:  Letterbox style:  "from stage two, go northerly on the trail until you reach the stream then follow the stream in an easterly direction for four hundred yards..."

4.  Reference Points:  instead of placing addtional stages with coordinates to indicate turns or to confirm you are on the right trail, use a reference point to confirm it by showing the coordinates on the cache page as an additional waypoints instead:   for example "Ref Pt. 3, large erratic boulder"

5.  Field Puzzle.  "At stage 2 locate the telephone number on the information plaque.  Add the first three numbers to the North coordinate (ex. 508 = .508) and subtract the last three numbers from the West coordinate to create the stage three coordinates.

6.  Treasure Hunt:  "Take 15 paces due north from the large oak tree and look up"

7.  Research Required:  This involves computing the stage location from research done before you head out for the cache.  An example:  "Start at the benchmark atop Rogers Hill (LW3469) and head south along the red dot trail..."

These are some of the possibilites.  I'd love to hear of other types folks have used or encountered in the field.